Note, this is not an art tutorial related post but is being hosted here because I believe the more eyes on this issue, the better. Art has always been a platform for social change anyways, so I am using my website expose an issue I care about.

I feel strongly about this. Humans are a type of animal and should not treat other animals cruelly. Exploiting animals for profit is disgusting and cruel. It’s good that the animal trafficking business has been exposed in the popular media, as in Tiger King. Hey all you cool cats and kittens, don’t exploit animals ;) or kill people or be in a sex cult.

It has come to our attention that Farmer Mary & Winterpast Farm has multiple cases of animal neglect, tax evasion, and misleading advertising.

A few more technical notes before we begin: This is a living document and will be updated regularly. Also, if you want to see the different sections, please expand the table of contents to jump around. It’s getting pretty large.

Tax Evasion Under Disguise of A Sanctuary

In order to receive the tax benefits associated with being a non-profit, you must have an EIN number that the IRS uses to identify you and the type of organization you run.

In Mary’s statement, which contains misinformation/lies, she says she has been a non-profit organization since November of 2019.

However, as stated, she is not because she is not in the almost daily-updated database maintained by the IRS government website.

Check it out for yourself: https://www.irs.gov/pub/irs-soi/eo_nc.csv you will not be able to find her alleged number, which she stated was (EIN 84–3620099). You can search both the front end website as well as download the CSV with over 1.7 million records and will not find that number. In addition, she says that she is a IRS 501( c )(3) but her likely falsified document says 503 a 2. These are not the same thing, so even her “proof” is inconsistent.

This has been going on for about 17 years. There is a reason many things she does are cash only.

Among many things, Winterpast is advertised as an “…An animal sanctuary where goats, sheep, emu, a mini donkey several types of ducklings, peacocks, a goose, pigs and lots of bunnies, guinea pigs (most former pets) and chickens all co-exist peacefully” however, she also is a meat farm. A regular petting zoo farm could also be a sanctuary, if ran correctly, but not a meat farm. And certainly not one that doesn’t care for the animals properly.

These are two very conflicting things.

You are a sanctuary or you aren’t.

According to the Merriam-Webster dictionary, a sanctuary is defined as:

“a place of refuge and protection”

We have a lot of photo evidence that can be found in the image gallery below. Each claim is substantiated by pictures that volunteers took, Mary herself took, and/or visitors.

Being bred for profit, having your health needs grossly neglected, and being killed when you are not “earning your keep” is not an animal sanctuary. In addition, you may be a prey animal that is rented out for profit, which is not decreasing the number of pets or teaching responsibility and is only contributing to stress and instability. Decreasing the number of pets is done by spaying and neutering, not being pimped out to have babies that will be held at 1 day old and fed an incorrect diet.

→ Why should you spay/neuter your pet?

→ Why should you not participate in rent in animal/ traffic animals for profit?

Her website changed recently, but you can view an old snapshot archived here: https://web.archive.org/web/20191102192147/http://winterpast.org/

If you want to see vetted, transparent charities/non-profit, try visiting Charity Navigator or view In Defense of Animal’s List of vetted animal sanctuaries.

Many of the foods she gives her animals and asks people to donate are grossly inappropriate.

For example her website says this for what to bring:

Unfortunately, according to the House Rabbit Society, which has articles written by actual vets (vet school takes 4 years + any fellowships)

The organization’s Diet FAQ also indicates babies should not be eating fresh vegetables, as the calcium can cause gas and can even kill if they are too young.

This is just an example with rabbits, but there are guinea pigs, chicks, chickens, goats, and more which also eat different things.

The diets of all of the animals are different, but those differences are not even addressed.

When running an animal sanctuary, it’s good to know what is safe and healthy for the animals to eat.

Just one example of animal neglect with photo evidence & denial 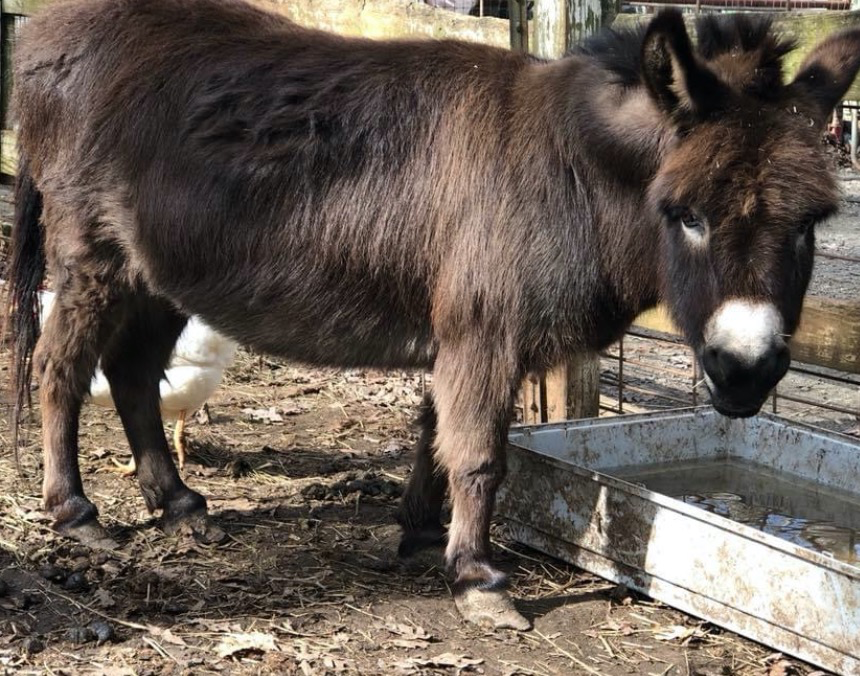 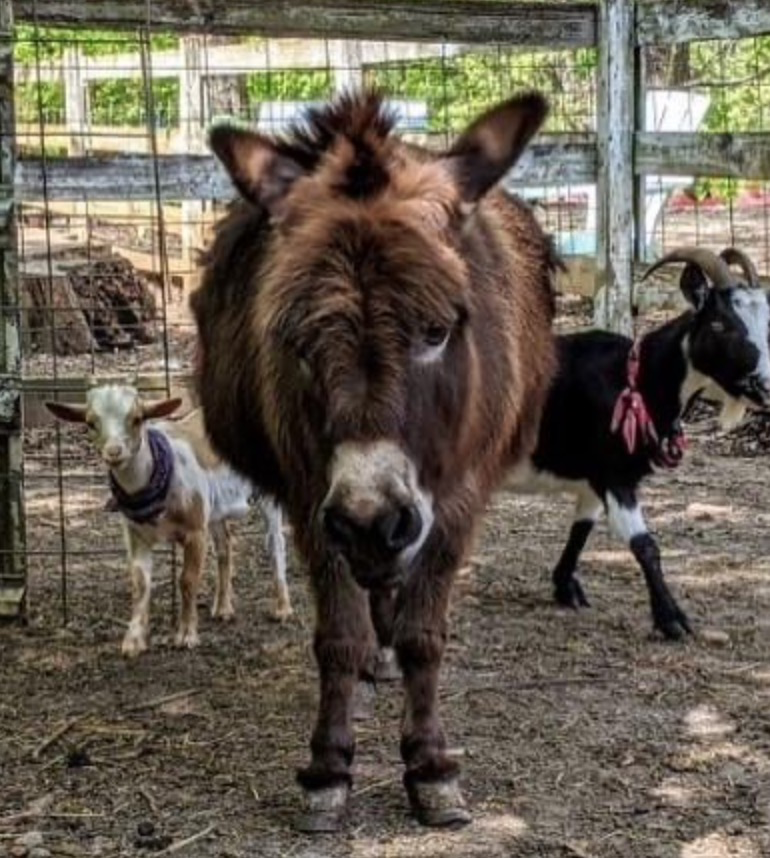 As you can see her hooves are turned up, here’s an actual farrier’s definition of over grown feet:

Farmer Mary posts this, but visual inspection of her own original pictures states otherwise.

Evidence is necessary and we have plenty. Here is a compilation of all highlights as of May 11 2020, containing personal accounts from visitors, analysis of conditions, evidence of health care neglect, and more.

(This will likely take a bit of time to load)

Meet Zebra! Yesterday, some absolutely WONDERFUL friends of the farm decided that enough was enough and they were gonna go spring him from Winterpast. The first photo is where he’s lived at the farm, the second one on his way to his foster home, and the third is exploring his yard - with grass! He was, and is, in very poor health. There was absolutely no paperwork for him or any vet records, so the volunteers chose a rabbit savvy one to go to ASAP since Zebra was/is experiencing the following: - when he walks, he scoots his head on the ground so he’s like pushing himself with his back feet, really, really red and hot ears, no whiskers at all, eye discharge, sniffling a TON, raw skin all over-very irritated, hungry/hurt from fighting for food, super duper matted (according to Mary, this was because visitors haven’t been able to come and brush them for 6ish weeks, so not sure if he even got out of his cage often/at all during this time), genitals swollen & bleeding, infected abrasions on his nose from being attacked by another animal, coughed whenever he was eating - very congested, messy butt, bloody legs from wire flooring, possible internal parasites (waiting for cultures), dark urine, hair coming out in clumps. These were some issues, among other things, but I’m happy to report that Zebra is settling in nicely and LOVES his foster moms. They went to the pet-store to get him his first ever toys and stuffed animal - he’s thrilled! The amount of happiness this now free range bunny has is incredible. Despite being mistreated for over 2 years, he’s full of love! Please consider helping defray the high vet costs by venmoing @ Marissa-Ryle or PayPal is meryle8975@gmail.com...anything helps! We are so thankful that he’s gotten started on the many medicines he needs and will continue to need over the next few months. During the exchange, Mary spoke of “trolls” and smug vegans from Colorado who illegally keep fake ESAs in their dorm rooms the entire time. She also mentioned how (since he has an ear tattoo) she would have named him Anne Frank to be cute if he was a female, after a young girl who also had a tattoo but hers was from the Nazis.....☹️🤮

Hey all! In case you’re not aware of what’s been going on I’ll give you a brief description below. We have received information that @/winterpast_farm has been severely neglecting and abusing their animals for years. Please look at my FOUR highlights for all current facts. Farmer Mary rents out baby goats, hedgehogs, guinea pigs, and rabbits to anyone and everyone. She calls herself a rescue but breeds animals then butchers them for meat once they’re too old to be cute and rented. She constantly begs for money and volunteers since she is unable to take care of the animals herself. This leads to the animals all having overgrown hooves, extremely overgrown nails, improper diets, and no clean water. The animals are terrified and we have proof that they do not go to vets hardly ever. See the second slide for one such fact. She cannot take care of the animals yet asks people to purchase more for her and breeds excessively. Tons of animals at her “animal sanctuary” are ill and dying. This isn’t even a 1/10th of what has been going on. We are working with local law enforcement and dozens of other groups, hopefully including the Mayor soon. Please DM me if you can help or if you’d like additional information and don’t forget to checkout my 4 (soon to be 5) highlights on this. It is unacceptable. She is in denial that the animals are treated poorly, but her constant posts always illuminate the truth. We will free them. They will get good homes. They will get the vet care they need. We just need your help. #animalabuse #farm #meat #bunniesofinstagram #rescue #winterpastfarm #boycottwinterpast #boycottwinterpastfarm

We’ve contacted authorities and animal rights organizations, and you can help us by spreading the word, also contacting agencies, and signing this petition

→ Donate to real animal sanctuaries that are transparent and have been vetted.

Please share with your friends if you can, real change will mean the world to the animals in need.